GRAND FORKS — The Greater Grand Forks Fair began Wednesday and will be in town through the end of the weekend.

The fair will be open Wednesday and Thursday from 4 p.m. to midnight, Friday and Saturday from noon to midnight and Sunday from noon to 9 p.m. Admission is $7 for attendees 14 years old and up, $5 for those ages 6 to 13 and all children 5 and younger get in free.

Jeanie Berns has worked for the Greater Grand Forks Fair since 2017 and has been its manager since 2018. She said there will be approximately 20 rides throughout the fair’s running time.

“We have good variety,” Berns said. “We have some thrill rides for those that like that, we have some family rides and we also have a good assortment of kids rides.”

Food options will also be plentiful, with anything from traditional corn dogs and donuts to Filipino food and foods of other nationalities and cultures.

Weather for the weekend looks generally favorable, but Berns said it is always a factor.

“We live or die by the weather,” Berns said. “We just pray that it's good weather and everybody comes out and enjoys it when they can.”

Part of what Berns believes sets it apart from other fairs and events is having entrance to all the performing acts being included in the price of admission, including Alfy's "World of Robotic Puppets,” a tiger encounter, face painting, ATV BIG AIR Tour, the Duane Sanden Firework Extravaganza Saturday night and more.

“We keep getting a little better every year,” Berns said.

Full schedules for each day can be found at www.grandforksfair.com. 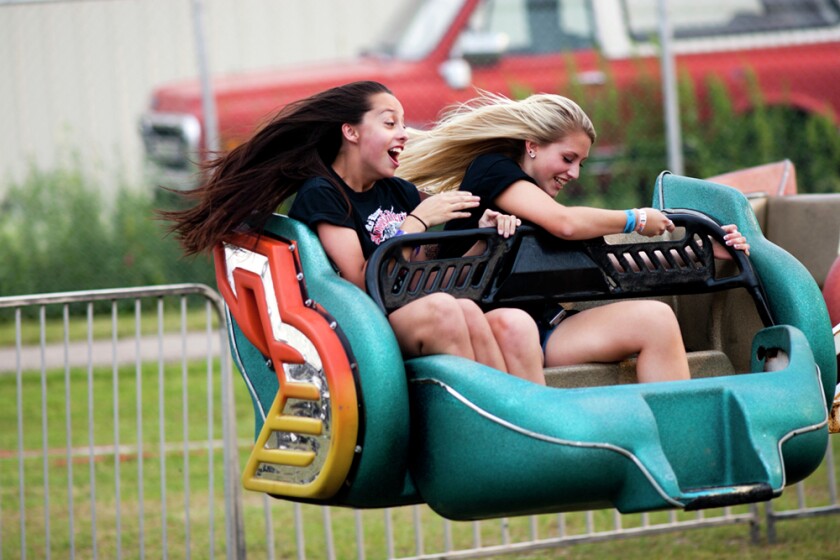 From left, Kelly Witucki and Nicole Oncken, of Grand Forks, ride the Sizzler at the County Fair in Grand Forks in this Herald file photo.


﻿
Read The Rest at Latest | GrandForksHerald-- (opens a new tab)