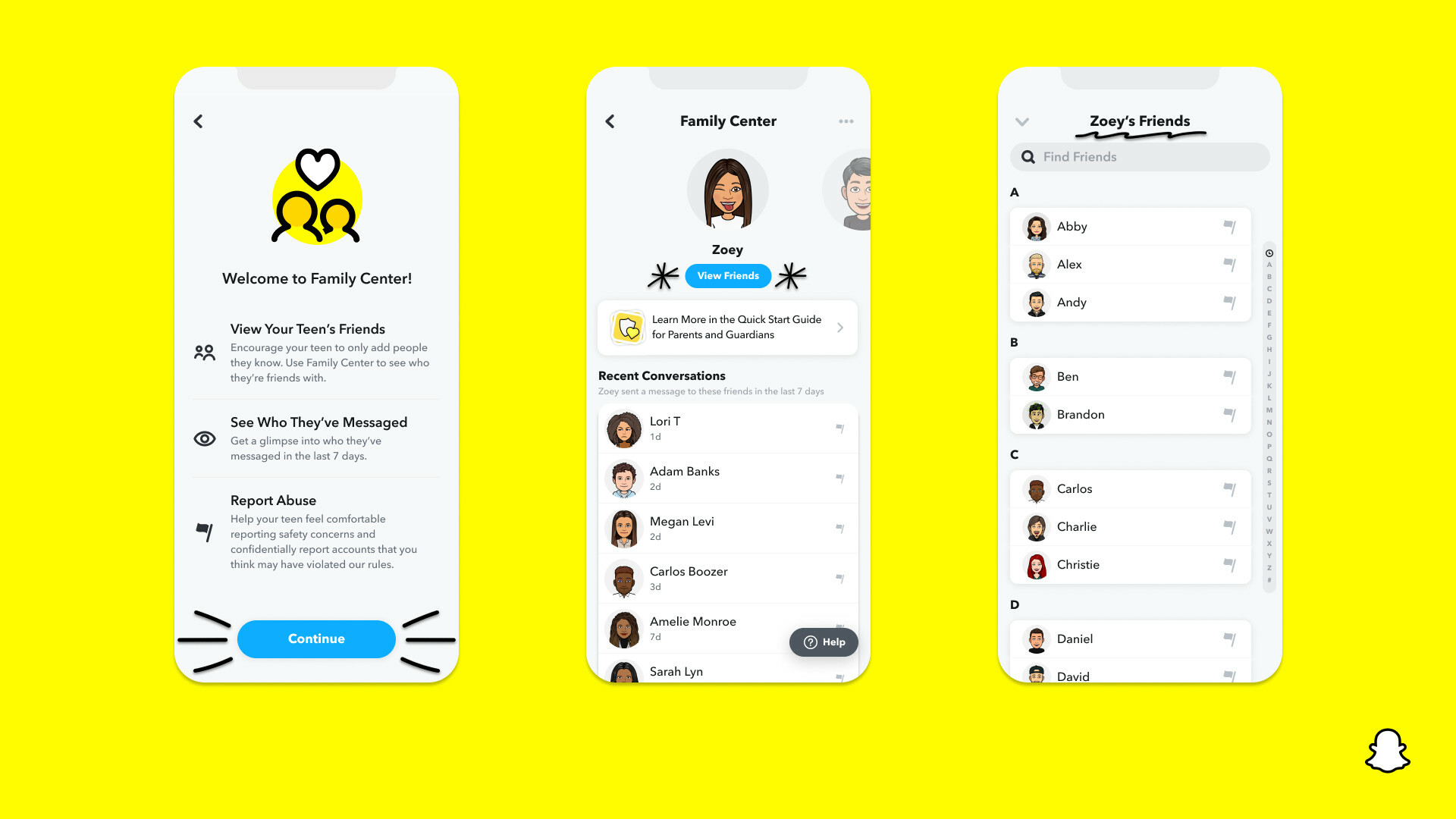 Snapchat has announced a new in-app safety tool called Family Center, designed to let parents see who their kids are talking to while keeping the content of the conversations private. It's basically the online equivalent of watching your kid play with their friends in your front yard, as opposed to pressing your ear to their bedroom door or intercepting their mail.

Family Center will allow caregivers to view their child's friends list, see which accounts they've been communicating with within the past week, and directly report suspicious accounts to Snap. Teenagers will also be able to see how their parents see them though Family Center, similar to Facebook's "View as" feature.

Unlike Instagram's own Family Center safety hub launched earlier this year, Snapchat's Family Center won't allow guardians to set time limits on the app's use nor see how long a user has been active. As noted by Snap's APAC head of policy Henry Turnbull, both iOS and Android already have time limitation tools which parents can use. However, Snap does plan to eventually add new features to Family Center, such as more content controls and the ability for teens to alert their parents when they themselves have reported content.

Family Center was developed in consultation with families and online safety experts, Snap noting that it is intended to give teens privacy while still enabling their parents to protect them.

"Family Center is designed to reflect the way that parents engage with their teens in the real world, where parents usually know who their teens are friends with and when they are hanging out — but don’t eavesdrop on their private conversations," said a Snap blog post.

To access Snap's Family Center, the parent or caregiver will need a Snapchat account of their own — a concept that will probably horrify most teens. The parent and child's accounts must also be mutual friends, which will allow the adult to send the teen a Family Center invitation. This means adults can't snoop on a kid without their knowledge.

Not every teen will be happy about it regardless, and more than one Family Center invite will probably be accepted begrudgingly. But at least they'll know it's happening rather than being kept in the dark.

Any parent, guardian, or family member over 25 can invite a child to join Family Center, and only teenagers aged between 13 and 18 are able to join as the monitored party. Children younger than 13 aren't allowed to join Snapchat under its Terms of Service — and Snapkidz, Snap's app for kids under 13, was discontinued by 2016 — meaning elementary school kids shouldn't be snapping at all.

"​​Our Family Center feature will help parents get more insight into who their teens are friends with on Snapchat, helping foster positive conversations about online safety within families, while respecting the privacy and autonomy of teens," said Snap's APAC general manager Kathryn Carter.

Family Center will roll out August 9 in the U.S., UK, Canada, Australia, and New Zealand, with other countries to follow later this year.