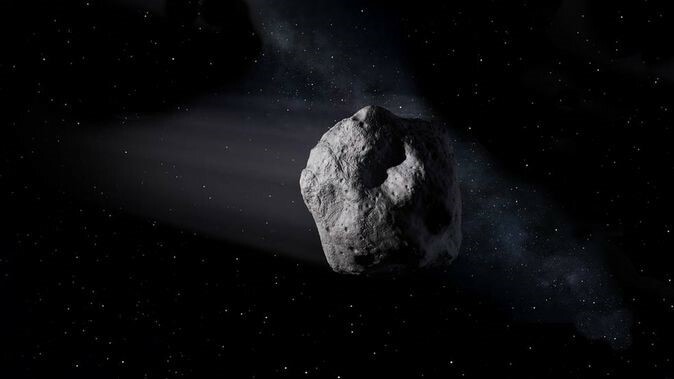 NASA will soon test its ability to deflect a threatening asteroid away from our humble blue planet. On Sept. 26, the agency will slam a spacecraft the size of a vending machine into a space rock the size of a great Egyptian pyramid. And, crucially, you can watch the event live.

The sci-fi-like endeavor is called the DART mission, or Double Asteroid Redirection Test, which launched in November 2021. It's humanity's first-ever attempt to purposefully move an asteroid. The rocky target, Dimorphos, is not a threat to Earth, but the mission is an experiment to see how civilization could alter the path of a menacing asteroid, should one be on a collision course with our planet.

Though no known asteroid of at least 460 feet wide is a threat for the next century, a future strike, at some point, is inevitable. So the $330 million mission is crucial.

"We are right now defenseless against any asteroid aiming for Earth," said Markus Wilde, an associate professor of aerospace, physics, and space sciences at the Florida Institute of Technology. Wilde is not involved in the mission. Slamming a spacecraft into Dimorphos may sound dramatic. But the goal is just to give Dimorphos a nudge. During a true deflection of an incoming asteroid, such a nudge would happen many years or decades in advance of the imminent collision. "That's enough time to make sure it misses Earth," explained Andrew Rivkin, a planetary astronomer at the Johns Hopkins University Applied Physics Laboratory and one of DART's lead scientists. Over years, a tiny alteration in an asteroid's movement adds up to a big change in the ultimate trajectory.

SEE ALSO: What we'll see when NASA crashes into an asteroid on purpose

This strategy, of course, requires knowing what's coming. In good news, astronomers have already detected over 27,000 near-Earth objects, and have discovered some 1,500 each year since 2015.

"We are right now defenseless against any asteroid aiming for Earth."

But in the coming few decades, many more rocks need to be found: Astronomers estimate that thousands of sizable asteroids over 460 feet wide remain unfound. Fortunately, astronomers have already located over 90 percent (and counting) of the rocks half-a-mile wide or bigger — the kind that could spell catastrophe for large swathes of Earth. But the smaller, more elusive rocks still have a strong potential to sneak up on us. A rock some 187 to 427 feet across swooped by Earth in 2019 and surprised scientists. Such an impact could be devastating. Some 50,000 years ago, an asteroid 100 to 170 feet across left a 600-foot-deep crater in Arizona. "A similar-size impact event today could destroy a city the size of Kansas City," David Kring, an impact expert at the Lunar and Planetary Institute, told NASA this year.

"We need to be able to find these things early," emphasized Cathy Plesko, a scientist at Los Alamos National Laboratory who researches asteroid impacts and is working on the DART mission. "We're getting there, but we're not there yet." 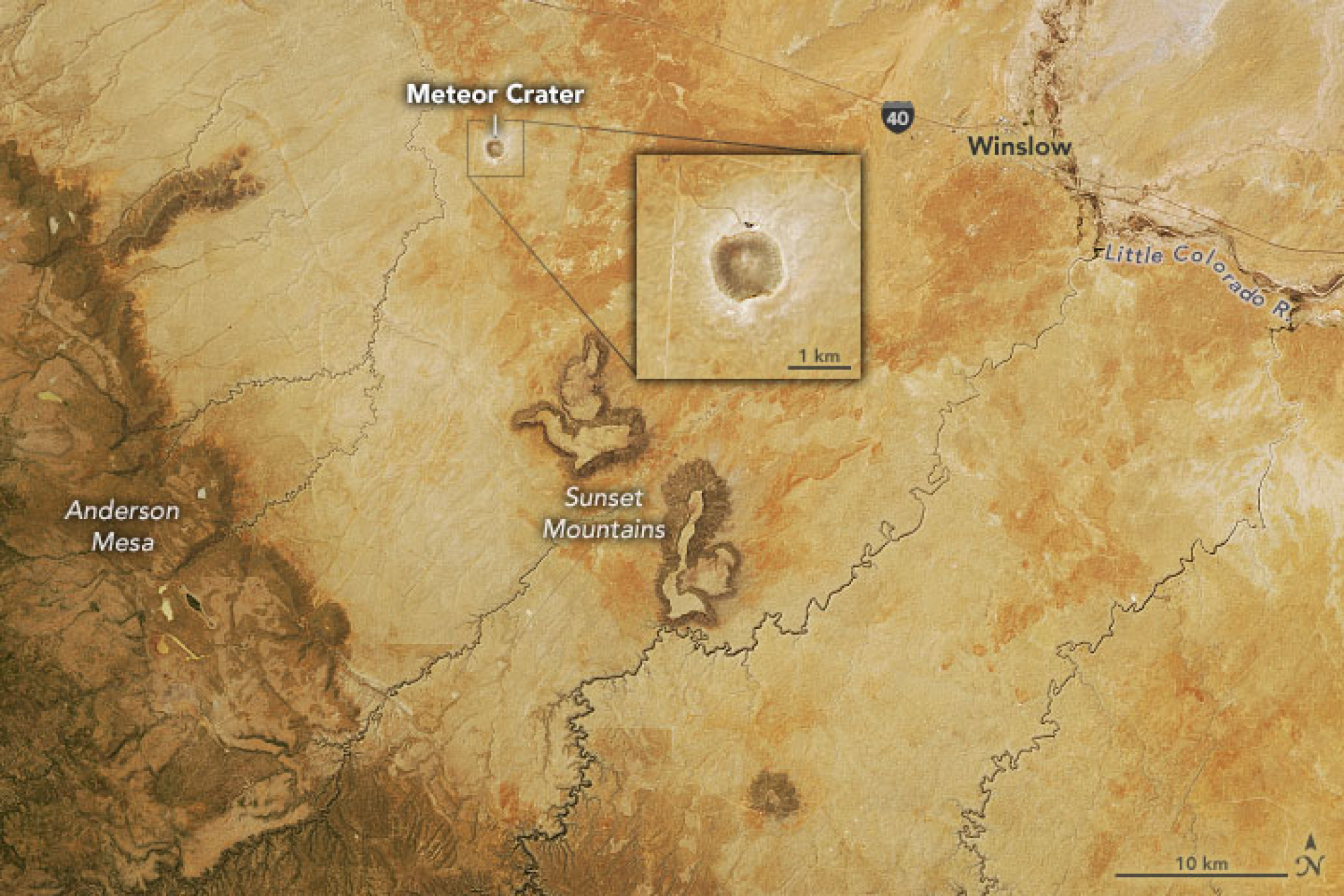 The DART spacecraft will slam into 525-foot-wide Dimorphos when it's 6.8 million miles from Earth (live images, sent back every second, will show the view as the craft approaches its target). But Dimorphos won't be alone. It's actually orbiting a much larger sibling, the half-mile-wide Didymos.

For astronomers, this makes Dimorphos an ideal collision target. After the impact, which will spray rubble into space, scientists on Earth will use telescopes to gauge how much the collision (or "nudge") alters Dimorphos' orbit around Didymos. And that's the crux of the experiment: How much did we move the space rock? (Scientists hope to slow its orbit by several minutes, or even 10, over the course of a 12-hour orbit.)

NASA will capture extreme footage of the grand 15,000 mph impact. Ten days before the strike, the DART spacecraft will release a toaster-sized "CubeSat." The small box will trail DART by a few minutes, allowing astronomers to see exactly what happens as a plume of rock is blasted through space. 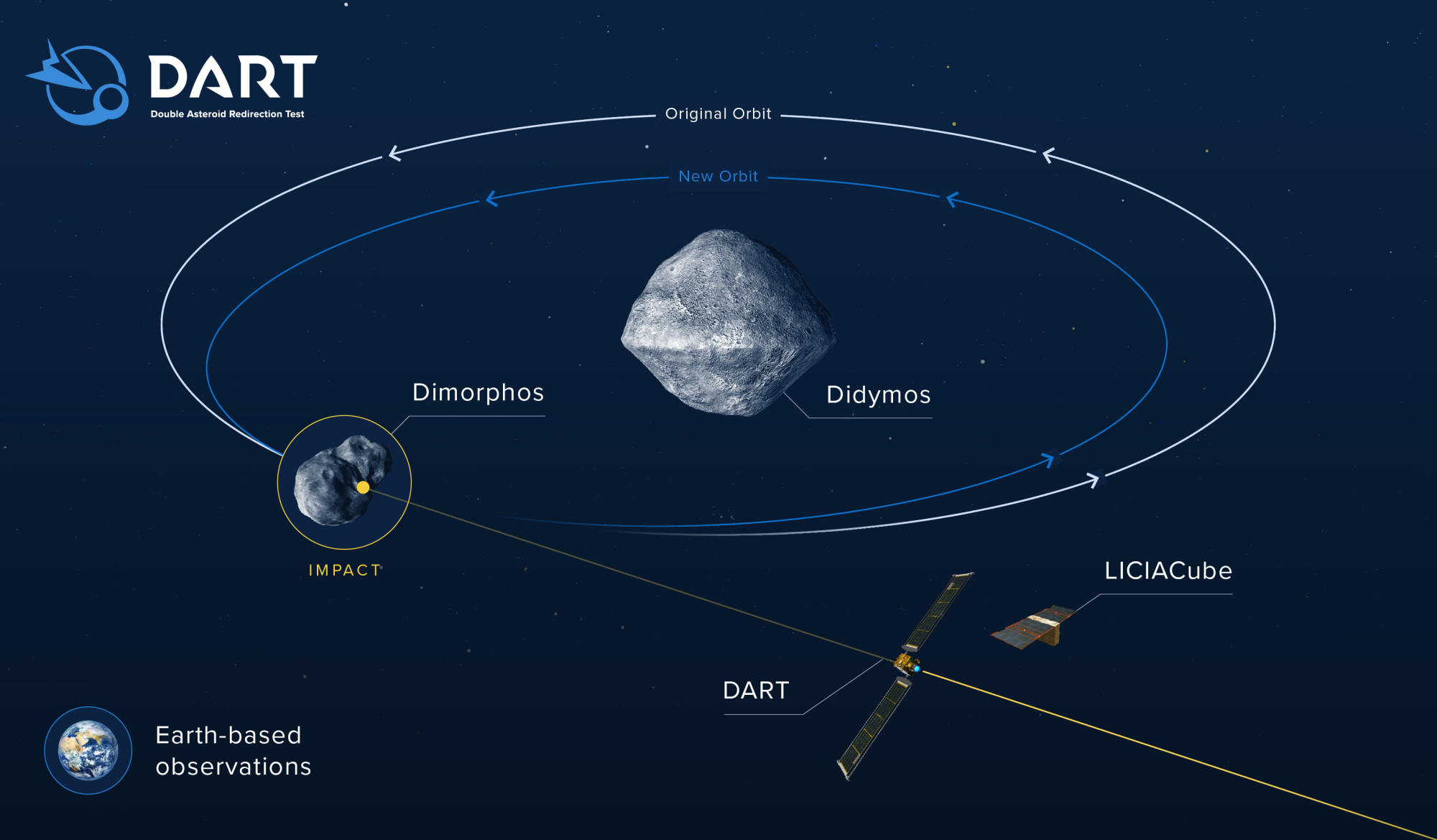 If NASA successfully slows down Dimorphos, it won't simply be an unprecedented, deep space achievement. It's proof to future generations that the planetary defense technique works. If a larger asteroid is discovered hurtling towards Earth in 2077, the same exact mission won't suffice, but space agencies can now better plan to deflect the incoming space rock. Maybe two spacecraft would have to be sent, said Plesko

"It's the same principle. It would just be a matter of scaling it up," she said.

To grasp how to deflect a variety of asteroids out there — some are hunks of rubble, some are masses of metal, some are bizarrely shaped — NASA may have to run a series of DART-like collisions in the coming decades, noted Wilde of the Florida Institute of Technology. 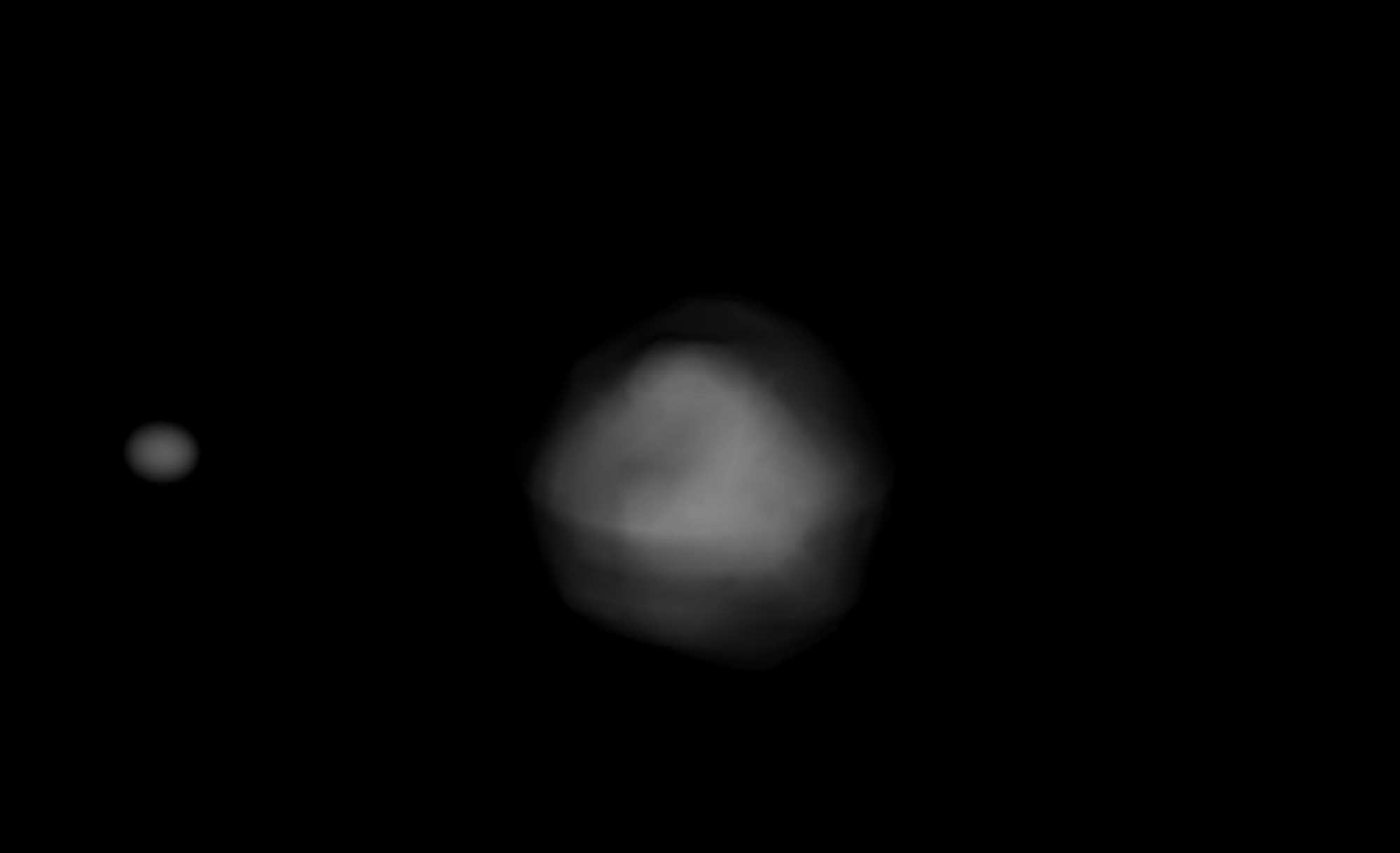 An image, created from radar and other data, of the asteroids Dimorphos and Didymos. Credit: Naidu et al. / AIDA Workshop

Yet one thing is clear. Deflecting an asteroid years before it arrives is an optimal solution for defending Earth from a looming threat. What we don't want is an emergency. That could mean resorting to risky defensive measures, like launching a nuclear bomb into space to blow up a fast-approaching 700-foot-wide rock. Recent research based on computer simulations found such a nuclear detonation could actually blast away most of the threat. But there are unknowns and likely unintended consequences, noted Plesko, like the potential spawning of innumerable bullet-like micrometeorites that could trigger a runaway cascade of debris and satellite collisions. That would destroy civilization's invaluable communications, weather, and scientific satellites.

A well-calculated asteroid deflection is preferable, and space scientists are thrilled the mission is about to launch. The $330 million price tag is well worth it, they say.

"It's definitely worth its money," said Wilde.

This story was originally published on Nov. 13, 2021. It's been updated with information about when the impact will occur and how to watch this unprecedented event.