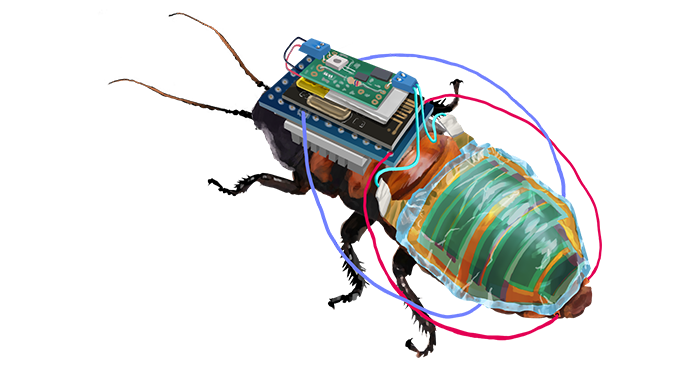 While a cyborg cockroach is probably the last thing you want to imagine, this technology is being developed with good intentions. Researchers at the RIKEN institute in Japan have designed a remote-controlled, rechargeable cyborg cockroach — that can be used for search-and-rescue missions in hazardous areas and to monitor the environment.

These are live cockroaches that are laden with technology that allows scientists to control their movements.

SEE ALSO: A robot dog entered a zoo. The animals were not fans.

In order to create the cyborg cockroaches, the researchers had to develop technology that conformed to the cockroach's body, didn't inhibit the cockroach's movement, and held battery life. Their solution was a backpack with a battery that's recharged using built-in solar cells that sticks the cockroach for long periods of time. The team used ultra-thin solar cells in order to not obstruct the movement of the roaches.

The cockroach's movements are remotely controlled by stimulating the wires attached to the cockroach's legs powered by the battery. The team experimented on Madagascar cockroaches which are 6 centimeters long and do not fly. They were able to make the insects turn left and right for 30 minutes.

According to RIKEN's press release, despite being developed specifically on cockroaches, Kenjiro Fukuda, senior research scientist at RIKEN and the lead of the research team, thinks their strategy can be adapted to other insects like beetles and cicadas in the future.